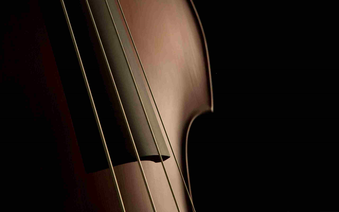 Gareth Wood was born in Cilfynydd, Wales in 1950. He studied composition and the double bass at The Royal Academy of Music, joining the Royal Philharmonic Orchestra in 1972. Since then Gareth has toured extensively with the orchestra, appearing at all the world's major music festivals. He has also played for many of the world's greatest conductors, such as Stokowski, Kempe, Karl Bohm, Haitink, Solti and has performed the "Ring" cycle at English National Opera with Reginald Goodall.

He became Chairman of the Royal Philharmonic in 1991, a post he held for three years. As a composer, he first came to the attention of the public in 1975 when his overture Tombstone, Arizona was performed at the Royal Albert Hall during the National Brass Band Festival. Many works for band followed and included test-pieces for the 1977 Butlins Youth Band Contest, the 1980 New Zealand Brass Band Championships and the 1992 European Championships. His musical resume is staggering. His compositions have been played all over the world.

In 1981 his overture Suffolk Punch, a commission by the Royal Philharmonic was premiered in Ipswich where the work was encored. 1982 was the centenary of the famous Gunfight at the O.K. Corral and Gareth re-arranged his overture Tombstone for the University of Arizona Symphonic Wind Band and was played actually in the O.K. Corral the very day of the anniversary!

The National Youth Orchestra of Wales has also kept him busy, commissioning three sinfoniettas and two fanfares. In fact, fanfares have been a major part of Gareth's output and have been written for such occasions as the 150th anniversary of Cunard (performed on the QE II), the opening of the Kravis Centre in West Palm Beach, Florida and the commencement of the Royal Philharmonic's residency in Nottingham.

A fanfare overture was commissioned for the launch of the Cardiff Bay Development Corporation and was recorded for EMI by the Welsh Opera Orchestra, conducted by Carlo Rizzi. Other works include Three Mexican Pictures for wind band, a concerto for double bass which incidentally was performed by the brilliant young bassist Timothy Gibbs and the Wiltshire Youth Orchestra earlier this year (1995), two piano sonatas, a concerto for 'cello and brass quintet, sonatas for clarinet and viola and his Fantasy on Welsh Songs which is performed every year at the Last Night of the Welsh Proms in Cardiff.

A song cycle Poems within a Prayer was written for the tenor Robert Tear who also chose the poems set in the work. Toduri, a work based on fifteenth century Korean court music, was performed in Seoul as part of its 600th anniversary celebrations and was so successful that it was included in a time capsule which will be opened in 400 years!

He has also conducted the Royal Philharmonic at the San Juan Music Festival in 1995 and is closely involved with the R.P.O.'s education programme. The latest project involved members of the orchestra sitting with members of a youth orchestra and performing a new work commissioned by the Halifax Building Society, The Moors and the Mills.

He has written a fanfare for the 80th birthday of Yehudi Menuhin and has also written a violin concerto as a gift for Menuhin. Also two more bass concertos for Tim Gibbs, a trombone concerto for the NYBBW and a trumpet concerto for the Carmarthen Youth Band. Gareth's "Fanfare For Owain" has been adopted as the signature work of Camerata Wales and is dedicated to the Artistic Director.